I can’t believe it has been a week. Tom was my mentor and one of my dearest friends. Tom fought a long battle with what was eventually diagnosed as amyotrophic lateral sclerosis. 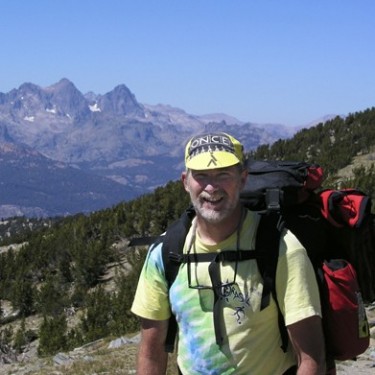 During the last few years, he showed an incredibly positive spirit as he spent time with friends, colleagues, and family - especially his three children, Josh, Emily, and Mackenzie. Tom loved the outdoors and would often show us pictures of backpacking trips in Tuolumne meadows. He treasured his final trip to Yosemite last fall. He was a scientific force, crafting manuscripts right up until the end. I will miss his optimistic spirit about science and life, and I will always be proud to be part of Team Alber.

Ben Barad will be rotating with us this quarter - welcome Ben!

The first paper, which is now available online, is a part of my graduate work in the Alber Lab at UC Berkeley. In this paper, Terry Lang (primary author of Ringer) tackled the difficult problem of how to normalize electron density maps from different experiments so that they are on the same scale. This is very easy when the maps are isomorphous (which almost always means that they protein and crystallization conditions are nearly identical), but has been very difficult when the maps are from very different experiments. The key insight is to include an estimate the unmeasurable F000 structure factor - this allows the maps to be placed on an absolute scale of electrons per unit volume (Angstrom3). We call these maps Electron Number Density (END) maps. In addition, to complement the new absolute scale of electron density in END maps, Terry and James Holton (who runs the beamline we normally use 8.3.1. at ALS) created a cool new way to estimate the noise in the map by “kicking” the data and performing parallel refinements (there are some similarities to the ExCoR approach recently published in Structure). We call these maps Refinement Against Perturbed Input Data (RAPID) maps. We’ve set up a website to describe the technical aspects of the paper. Hopefully these approaches will spawn a series of more quantitative electron density map analyses to take us further Beyond the Model and Into the Map (the title of my PhD thesis under Tom’s guidance!).

The second paper, which is online now, is part of a continuing collaboration with Peter Wright’s Lab at Scripps. In this paper, Bryn Fenwick (an awesome postdoc in Peter’s group) took the qFit multiconformer models (thanks to the never-ending genius of Henry van den Bedem) of DHFR from our CONTACT paper in Nature Methods and quantified heterogeneity within conformational substates (through the refined B-factors) and between conformational substates (through the coordinate differences between alternative conformations). By weighting these two sources of heterogeneity, we found a surprisingly good agreement with fast timescale dynamics measured by NMR. Here, as in previous collaborations with NMR spectroscopists, room temperature X-ray data was key to generating a good agreement between the two techniques. The NMR methods give us the timescale and extent of dynamics, but not the detailed structures - and the X-ray analysis gives us detailed structures, but not the timescale. We also obtained some new insights into the nature of disorder (static vs. dynamic) in the crystal. We are excited about these results because they suggest that order parameters can be estimated even for groups that are not currently accessible by NMR techniques (where only methyl and amide groups are straightforward). Given the exciting results of Wand and Kalodimos in calibrating NMR order parameters of methyl groups to overall protein conformational entropy, in the future we hope to compare the entropies estimated from the qFit models to conformational entropies from ITC and SPR experiments.

We have decided to continue our Movember tradition (without our leader Marcus who is now at U of T). Check out our page and consider donating to prostate cancer research.